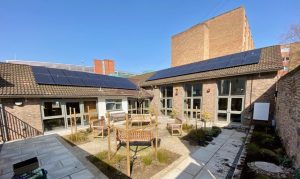 The Meeting House is used every day for community activities, refugee support, activist, fellowship, wellbeing and training organisations. Please click here to see our rooms for hire or contact central.warden@bristolquakers.org.uk.

To enquire about Meeting for Worship, or the online Sunday and Wednesday Meetings, please contact christopherdenman@hotmail.com

We also have an online discussion group on Friday mornings at 11 am. Please contact raybray@blueyonder.co.uk for details.

The Meeting House was refurbished in 2015 and again in 2019. It has a well-appointed kitchen, a professional food preparation area, a laundry, showers and four meeting rooms set around a pleasant courtyard. It is wheelchair accessible. The main room has a hearing loop.

To see more photos of our Meeting House click here.

The Meeting House is on Champion Square which lies behind (to the south of) the large Cabot Circus multi-storey car park. The location is well served by public transport and, in addition to the few car parking spaces on our premises there is a large public car park within a few metres.

By Car: Champion Square is near the south end of the M32/A4032, off the A4044 (Bond Street South, also known as Temple Way). We have a small car park which can be reached only from the southbound carriageway of the A4044, within a few metres of turning off the A4032. If this car parking space is full use Cabot Circus car park. (To drive from the Meeting House to enter the multi-story car park, leave Champion Square by the exit near the Phoenix pub, turn right, then go round the system to where the car park is on your left.)

By foot: Head for the Cabot Circus shopping complex; then go (east) towards its car park, crossing Bond Street via or near the glass footbridge.
From Cabot Circus car park: Walk out by the ground floor exit at the southwest corner, from where the Meeting House is visible.
From Temple Meads Station: Walk north about 2km towards Cabot Circus. For simplicity use the main road, though a more pleasant walking route starts from the station’s north-side exit.

By bicycle: Champion Square can be reached as by car and also via River Street or via St Matthias Park.
(NB: Cycling is not permitted within Cabot Circus.)